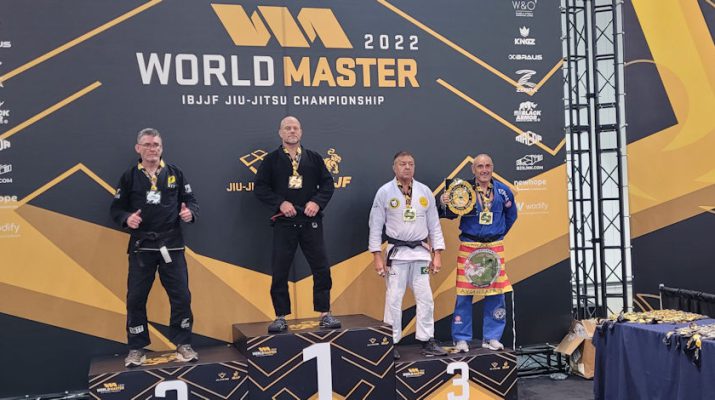 Scott Roffers traveled with eight Wisconsin 360 Brazilian Jiu-Jitsu teammates to the International Brazilian Jiu-Jitsu Federation’s World Master Jiu-Jitsu championship. The IBJJF holds its World Master championship once each year. The 2022 tournament was held on August 31 to September 3 at the Las Vegas Convention Center in Las Vegas, Nevada. Scott’s master 6 heavyweight black belt bracket consisted of ten competitors. As the #1 seed, Scott had a first round bye. He then proceeded to win the next three matches to claim the Master 6 Black Belt heavyweight world champion title for a second consecutive year.

Winning a world championship is pretty exciting in and of itself! But, the day became even more special when Scott’s coach, Scott Huston of 360 Brazilian Jiu-Jitsu, also became a black belt world champion. Coach Huston won his Master 4 heavweight bracket. He has been Scott’s head coach since the very first day Scott started in Jiu-Jitsu. These two have shared lot’s of laughs, blood, sweat, and tears over the past 12 years! Sharing a world championship accomplishment is definitely a major highlight along that timeline! Congrats to both!

Coach Roffers proceeded on to the open division. A total of seven competitors signed up to pursue the title of Absolute World Champion. Scott won his quarterfinal match and then lost in the semis to the eventual champion.